There are two new CDs out that relate to previous posts of this blog, and which many folks may not hear about; these releases are unlikely to be featured in a "new releases" email from Amazon or iTunes. Neither will be found at your local Wal-mart, but they can both be had from CDBaby.com. Each of these CDs is a personal, contemporary look at a very old American musical tradition.

When I was in Mississippi last month, I spent about an hour looking through the CDs and records at Cat Head Blues and Folk Art, a wonderful little store in Clarksdale. One of the finds I was most excited about was What Do I Do?, a 2010 release by Sharde Thomas, whom I mentioned in my 2009 post on Mississippi fife and drum music. Miss Thomas, 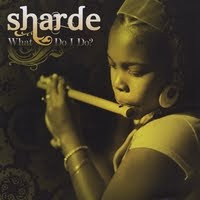 who is billed simply as "Sharde" on the CD cover, is the granddaughter of Othar Turner, the late master of the Mississippi Hill Country fife and drum tradition. That tradition reaches back to antebellum times, although the music has undoubtedly changed greatly over the years.

This CD was quite a surprise to me. I didn't know that Sharde had released a CD, and seeing the cover, with Miss Thomas and her fife, was a thrill. The second surprise was when I stuck the CD into my car's stereo: most of the album is R & B, not fife and drum music. The third surprise was that I liked all of it, even though much of it was not what I expected. Much of the success of the album is due to the production of Ricky Davis, who also plays guitar and drums on many of the tracks. He gives the proceedings a polished, professional sheen.

It shouldn't have been a surprise that Sharde, who must be about 21 years old now, is not content to confine herself to the fife and drum tradition; hers is a very different world from the rural Mississippi, isolated and racist, in which her grandfather grew up. Sharde's R & B is sweet and engaging - there is nothing aggressive about it. She sings about her family, about having a good time, about being young and in love. Her voice is nothing like the American Idol divas that seem to dominate pop and R & B these days, and I'm glad about that. It's pleasant, sure, and (sorry to use this word again so soon) sweet. One of the most touching of the R & B songs is "O. T.," which, of course, is dedicated to her grandfather. The introduction uses a recording of Mr. Turner's voice; he says, "If anything happen to me, I get so I can't play, Sharde gonna be the one." And she pretty much is, now.

There are also two blues on the album, one written by Sharde and one by her cousin, Aurbrey Turner, a musician who played drums behind Othar Turner. The blues songs manage to be as sunny and enjoyable as the R & B. Sharde plays piano on them, as she does on many of the R & B tracks.

But for many listeners, the meat of the album will be the four fife and drum tracks. They are as tough and exciting as anyone who has heard Othar Turner's recordings would expect, but they don't "feel" like Turner's music - they have an urgent, contemporary feeling, even when Sharde is playing music as traditional as the Hill Country standard "Bounce Ball" or the old African-American game song "Sally Walker." Part of this feel is due to the addition of Aurbrey Turner's drum set to the stand-alone snare and bass drums. On the live version of "Shimmie She Wobble," Turner's set is also credited, but it doesn't seem to be actually present there. These four tracks are the most assured and mature recordings of Miss Thomas's fife playing yet.

In many ways, the most innovative track is the last one, "We Made It." It ties together all the threads of Sharde's music: she plays fife and piano, and the song has elements of blues, R & B, and the fife and drum tradition running through it. That night in Clarksdale, this is the track I cranked up, and I couldn't keep still. 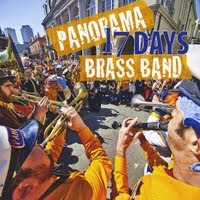 ch are strictly in the NOLA brass band tradition, "Nearer My God to Thee" and "Lily of the Valley." These should convince any skeptic that the Panorama is the real deal. "Lily" swings hard, and this might be my new favorite version of "Nearer My God to Thee," although there are recordings by the Olympia and the Onward that I love. Alto saxophonist Aurora Nealand's high harmony in the last four bars of the Panorama's "Nearer" is perfect and heartbreaking.

From the third track on, though, it's obvious that this is a different kind of New Orleans brass band. That third track is Nealand's arrangement of Ornette Coleman's "Lonely Woman" (!), which in the hands of the Panorama BB becomes both ominous and funky. From there the band goes on to touch on reggae, Balkan brass band tunes, Jewish freylkhs and horas, calypso, and even Haydn, in Schenk's arrangement of "St. Anthony Chorale," a piece which Brahms also used as source material.

Besides their atypical repertoire, the Panorama is unusual in terms of instrumentation. They use the old-style middle-register brass horns, alto and tenor horns, that all but died out in New Orleans around 75 years ago, when alto and tenor saxophones took over their function in the ensemble. The slightly nasal sonorities of the alto and tenor horns (two of the latter) give the band an unusual sound: full and slightly exotic. There are saxophones in the PBB, of course; besides the wonderful Aurora Nealand, Dan Oestricher's baritone sax helps hold down the bottom. There is only one trumpet; Jack Pritchett's performance is all the more heroic for that, since he usually carries the lead. Schenck hardly features himself at all; there are not more than one or two clarinet solos on the album, but his high countermelodies are excellent.

The CD ends with a "Lagniappe track," a lo-fi version of "Grazin' in the Grass" (which has become a New Orleans brass band standard), recorded live on the street during Mardi Gras 2010. It captures the chaotic excitement of a New Orleans street parade perfectly, down to the passing of a police car. The title of the Panorama Brass Band's new album refers to the fact that the band only exists for 17 days each carnival season. I'm glad they gave us an hour of music that we can enjoy the other 348 days.
Posted by Jeff Crompton at 8:17 PM No comments: