The Legends of Jazz - Photos From an Album 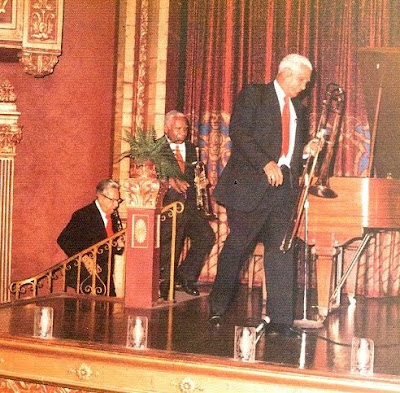 About a month ago I found a cheap copy of a 1973 LP by the Legends of Jazz, a (mostly) New Orleans traditional jazz band put together by drummer/producer Barry Martyn. The band consisted of Andrew Blakeney on trumpet, Louis Nelson on trombone, Joe Darensbourg on clarinet, Alton Purnell on piano, Ed Garland on bass, and Martyn on drums. Martyn was in his thirties at the time; the other musicians were all in their seventies or eighties. All were from New Orleans except for Martyn, a Brit, and Andrew Blakeney, who was born in Quitman, Mississippi, even though he is usually associated with traditional New Orleans style jazz. 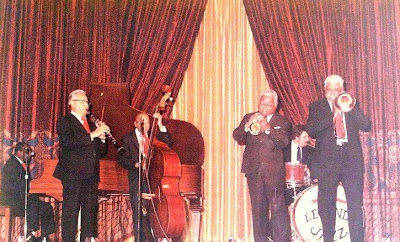 The album, on the Crescent Jazz label, was in great condition, on nice red vinyl. (I have since learned that some copies were also pressed on green vinyl.) However, the name of the group seemed to be something of an exaggeration - the Solid Journeymen of One Style of Jazz would be more accurate. (To be fair, Louis Nelson is one of my favorite New Orleans trombonists, and Ed Garland was indeed something of a jazz legend.) In any event, I didn't listen to the album right away, and only put it on the turntable for the first time a couple of days ago. As expected, it was enjoyable without being spectacular. 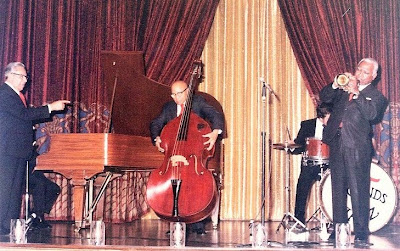 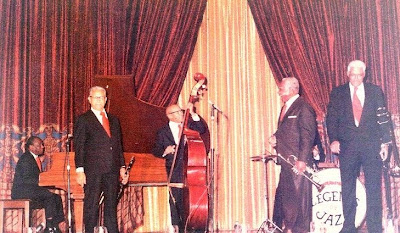 As I was listening and reading the liner notes on the back of the jacket, I realized that there was something still inside the record cover. I shook it, and much to my surprise, six photographs fell out. They were snapshots of the group in concert; obviously an unknown music lover attended a Legends of Jazz concert back in 1974, took some pictures, and bought the album as a souvenir (and had it signed by Nelson and Purnell). 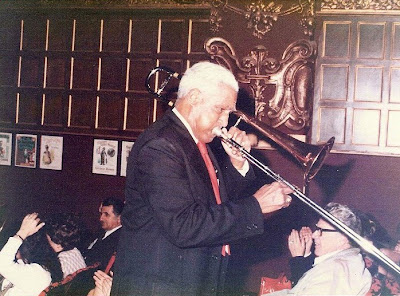 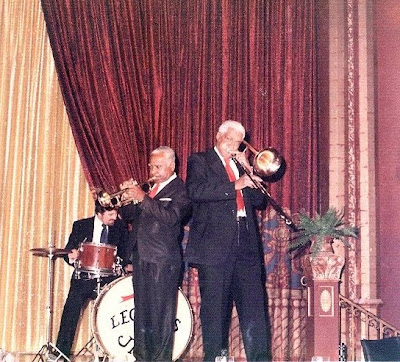 kind of washed out, but I scanned them, tweaked the color and contrast, and did some cropping to improve the layout of some. I thought they deserved to be seen, as presumably unpublished pictures of a group of jazzmen who, except for Barry Martyn, have all left us.
Posted by Jeff Crompton at 10:57 PM No comments: