This post is a rebuttal of sorts. As I write, I've got my copy of Bill Russell's American Music by Mark Hazeldine open to page 100. This page represents the major source of information in print anywhere about Pittsburgh pianist George Hornsby. And I don't like what it says.

William Russell's American Music label has long fascinated me. Russell started the label in 1944 to issue the recordings of New Orleans musicians he was making at the time. Some of the best recorded work by Bunk Johnson, George Lewis, Kid Shots Madison, and Wooden Joe Nicholas was issued on American Music. Russell issued 40 78 RPM records and 13 10" LPs before letting the label go dormant in the early 1950s. Some 20 years or so later, Russell began licensing American Music material to the Storyville label in Denmark and the Japanese Dan label, but in the intervening years, American Music recordings became legendary - not only for their musical quality, but because they were so scarce. Many collectors in those years first heard acetate dubs of the American Music 78s and albums before they ever saw the the actual records. The label is now owned by George Buck's Jazzology group, and most of the issuable music Russell recorded is available on CD.

As I said, most of the music Russell recorded and issued was by traditional New Orleans musicians, but he did venture into related areas. He recorded the St. Louis ragtime pianist Charlie Thompson and the Mobile Strugglers, a black string band from Alabama that played blues and country ragtime. And in February or March, 1947, he took a gospel pianist he found in Pittsburgh, George Hornsby, into Phifer Recording Productions in that city and recorded ten selections, eventually releasing four of them on 78s. 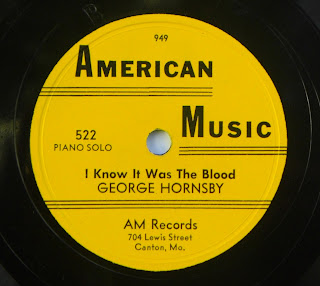 The two George Hornsby 78s represent some of the very few American Music recordings that have not been reissued - not on American Music, not on Storyville or Dan, not even by any enterprising bootleggers anywhere in the world. So of course, I kept my eyes open for them. I found a copy of American Music 521, "Bye and Bye" backed with "Jesus Gave Me a Little Light," about a year and a half ago. And a month ago I finally tracked down American Music 522, "I Know It Was the Blood" and "My Soul Loves Jesus."

George Hornsby is an elusive figure. According to Russell's biographical notes, he was born in Alabama in 1912, and in the 1930's had his own jazz band in Pittsburgh, the Fess Hornsby Orchestra. His name sometimes comes up in biographical discussions of Kenny Clarke - Clarke, a Pittsburgh native, played drums in Horsby's band. Russell indicates that Hornsby turned exclusively to religious music in 1939, and had a weekly radio show, "Modern Hymnology," in Pittsburgh.

Why haven't Hornsby's recordings been reissued? Well, according to Hazeldine's book on the American Music label, Russell wasn't happy with the results of the recording session, although I guess he was initially satisfied enough to issue four of the sides. On page 100, we find this passage:

This was the least successful of all the American Music sessions and Bill Russell was always reluctant to discuss it. Having listened to all of the [Hornsby] masters I can confirm that the playing is of a poor standard and there are no plans to issue any of the above tracks in the AMCD series.

Well, pardon my language, but this is bullshit. I haven't heard all ten recordings (plus alternate takes), as Hazeldine has, but the issued 78s are the work of an accomplished and excellent musician. There is nothing "of a poor standard" about these records.

I feel that Hazeldine has adopted Russell's values in decrying these recordings. William Russell was conservative in his musical tastes - he didn't care for later jazz developments, or even for the saxophone, which he felt had no place in jazz. I suppose that at some point he realized that George Hornsby wasn't a "primitive" gospel pianist, but a knowledgeable, modern (for the time) musician. Hornsby had formidable technical abilites, and his approach to the piano had more in common with Earl Hines than with Cow Cow Davenport or Jimmy Yancey. This was not to Russell's liking, apparently.

It's a shame that these excellent records have never been reissued, and probably won't be. So that interested listeners can hear them and make up their own minds, I've posted mp3's of the two issued George Hornsby 78s here. I invoked the name of Earl Hines in the last paragraph, and these recordings may remind some listeners of what Hines might have sounded like if he had turned to gospel music.

I don't know what happened to George Hornsby after his American Music session, or when he died, as he presumably has. But I'm unwilling to let the negative opinion expressed in the one readily available reference book mentioning him go unchallenged. I dig your music, Fess Hornsby!
Posted by Jeff Crompton at 10:31 PM 1 comment: