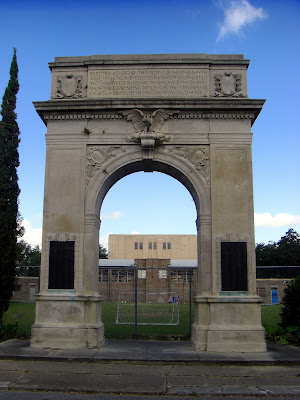 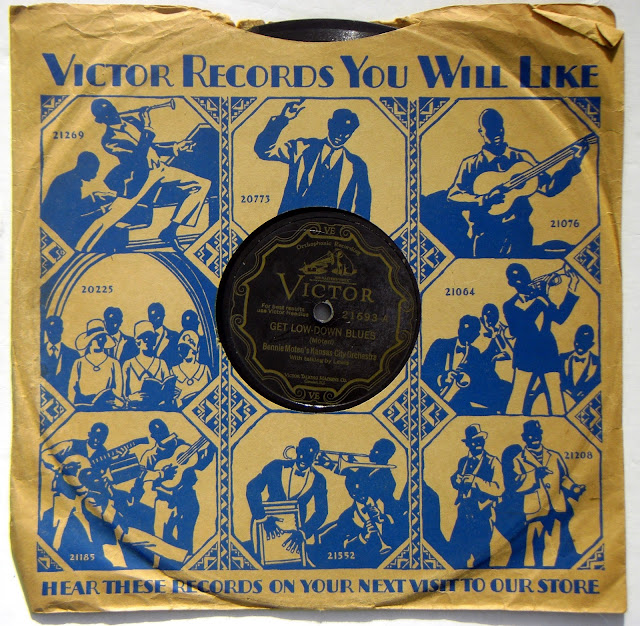 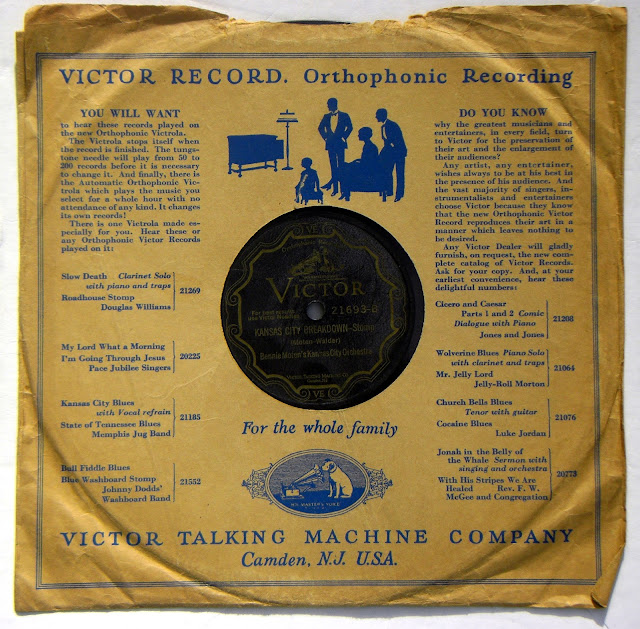 I have about half of this music on CD, but none of these 78s.  I selected a Victor record from the same period to keep in this wonderful sleeve - "Get Low-Down Blues"/"Kansas City Breakdown:" by Bennie Moten's Kansas City Orchestra.  I have quite a few early record sleeves, but this one is by far my favorite.
Posted by Jeff Crompton at 8:00 PM 2 comments:

John Tchicai died yesterday.  The Danish saxophonist, most strongly associated with free jazz, avant-garde, or whatever you want to call the more adventurous side of jazz, was 76.  From the first time I heard Tchicai's music, some 35 years ago, I was transfixed - I had never heard anything like it.  The record was Archie Shepp in Europe, the Delmark label's U.S. issue of the album also known as The New York Contemporary Five, Vol. 1.  Tchicai's contributions to the music of this important, but still underrated group stood apart from the improvisations of his fellow horn players, Don Cherry and Archie Shepp.  Shepp was loquacious and Cherry quirky, but both of them indulged their imaginations fully, resulting in solos which were rambling (in a positive sense), full-bodied, and many-noted.  Tchicai's alto saxophone improvisations, on the other hand, carried a mantle of reserve, of deliberation; they exhibited a sense of logical construction that was almost compositional.  Yet his playing somehow managed to combine this careful construction with as much adventurousness as Cherry's or Shepp's.  Amiri Baraka, then known as Leroi Jones, called Tchicai's early solos "metal poems."

And there was a freshness in Tchicai's playing; it was like nothing else in jazz.  Based on his early style, I would guess that he had listened fairly extensively to Lee Konitz and Ornette Coleman, but he didn't sound like either of them.  Early and late in his career, he sounded only like John Tchicai.

During his early stint in New York, from 1963 to 1966, Tchicai achievements were remarkable - as he put it later, "I managed to do a lot in a short time."  Besides his contributions to the New York Contemporary Five, he was alto a member of the very important New York Art Quartet, with trombonist Roswell Rudd as the other horn.  He played on Albert Ayler's New York Eye and Ear Control.  And a jam with John Coltrane led to Tchicai's appearance on Coltrane's groundbreaking Ascension album.

He returned to Europe in 1966 and expanded his instrumental arsenal; he never abandoned the alto sax, but added tenor and soprano sax and bass clarinet.  He formed the genre-bending big band Cadentia Nova Danica and played and recorded with Pierre Dorge's New Jungle Orchestra (I particularly like "Very Hot/Autobahn Tchicai" from the album Even the Moon is Dancing) and various Cecil Taylor large ensembles.  In the 1990's, after he was awarded a lifetime grant from the Danish Ministry of Culture, he moved back to the U.S. - to California this time.  After many more albums and collaborations, he moved to the south of France, where he died in the hospital yesterday.

Over the years Tchicai's instrumental "voice" deepened and expanded in expressive range, while remaining recognizable and unique.  His discography is extensive, but my choices to pay tribute today were a very early album, Rufus, and a later one, Love is Touching.  Rufus is by four-fifths of the New York Contemporary Five (Don Cherry is missing); it's from 1963, and is a wonderful example of his early style.  Love is Touching was recorded in California over 30 years later with a very young backup band, the Archetypes.  Tchicai is generous with solo space (I wish he had featured himself more) and utilizes electronics effectively.

If you want to hear John Tchicai, any of the albums by the New York Contemporary Five and the New York Art Quartet are recommended, as is Afrodisiaca by Candentia Nova Danica.  I certainly haven't heard Tchicai's complete recorded output, but my favorites include Timo's Message on Black Saint, Grandpa's Spells on Storyville, Life Overflowing with Charlie Kohlhase on Nada, and Witch's Scream by Tchicai, Reggie Workman, and Andrew Cyrille on TUM, as well as the ones I've already mentioned.

I never heard Tchicai in person, but I came close.  One my first visit Copenhagen, I missed him by one day.  I regretted that then and I regret it now.  So long, John Tchicai.