Any Ellington aficionado knows that the above initials stand for Black, Brown and Beige. B, B & B is Ellington's longest, most ambitious work, and I've spent lots of time over the last week listening to it, reading about it, and generally becoming reacquainted with it. Geek alert: heavy music history and musical analysis follow.
Black, Brown & Beige was composed for the Duke's first Carnegie Hall concert, which took place on January 23, 1943. Ellington described the piece as a "tone parallel to the history of the American Negro," and parts of the work fit this programatic idea very well. The "Work Song" section certainly sounds like the folk music of its title, and Johnny Hodges' reading of the "Come Sunday" melody evokes a spiritual longing, rather than the erotic longing Hodges was so good at expressing. But like any music, the piece stands or falls as music, not as a history lesson or a depiction of something concrete.
The history: Duke's band played the entire piece only at its Carnegie Hall premiere and at several other concerts around that time period. It was recorded at the premiere and was finally released on an album 34 years later. The critics who were at Carnegie Hall, in their infinite wisdom and after one hearing, pretty much ripped the piece apart, and Ellington never played or recorded the entire work again (although he came pretty close at times). At his Carnegie Hall concerts of the next few years, he played excerpts, and was in turn criticized for not playing the entire piece. Go figure. When the 1942-44 recording strike ended, he recorded about 22 minutes (the full piece is twice that long) of B, B & B for Victor, including the "Work Song," and "Come Sunday" sections of Black, "The Blues" and two short dance excerpts from Brown, and about a minute (the "Sugar Hill Penthouse" theme) of Beige. This recording is well worth hearing; the excerpts are well-chosen and well-performed. I probably listen to this recording more frequently than to the entire 1943 version.
Ellington couldn't get B, B & B out of his system, however, and continued performing parts of it throughout the rest of his career. The 1958 Black, Brown & Beige album he recorded for Columbia has the Black movement on side one and a version of "Come Sunday" with Mahalia Jackson on side two. He also featured Black during his 1965 European tour - I have a version from a concert in Paris in my collection. And he recorded the almost the entire piece - minus some introductions and transitions - in pieces between 1965 and 1971; this has been issued as Vol. 10 of The Private Collection.
Most of Ellington's longer works are suites - sets of short, loosely related movements which stand more or less on their own. There is no real musical precedent for B, B & B, but it's certainly more symphonic in its length and scope. Each of its three movements is composed of more or less three sections:
Black: Work Song; Spiritual (Come Sunday); Light
Brown: West Indian Dance; Emancipation Celebration (The Lighter Attitude); The Blues (Mauve)
Beige: Cy Runs Rock Waltz; Beige; Sugar Hill Penthouse (Creamy Brown).
Ellington used all of these subtitles at various times. And no, I have no idea what "Cy Runs Rock Waltz" means.
Black is the longest and most well-constructed movement. The "Work Song" has a couple of strong motives, like a symphonic work, rather than well-developed melodies. That's not a negative criticism, by the way - motives are easier to work with and develop than long melodies (think Beethoven's Fifth). The "Come Sunday" melody is, of course, one of the most beautiful written by Ellington or anyone else, and Hodges' rendering is ravishing. "Light" winds up the movement by combining elements of the "Work Song" with the "Come Sunday" melody. This is a well-constructed piece of music with little waste, despite its 20-minute length. Ellington must have felt that this was the strongest movement, since it formed the basis or the entirety of his later B, B & B performance.
Brown consists of some attractive parts that are not tied together as well. The transition between the "West Indian Dance" and the "Emancipation Proclamation" is kind of forced and trite, and there is no transition to "The Blues;" the "Emancipation Proclamation" just stops and "The Blues" starts. The latter section is excellent, however, especially in the original version with the great Betty Roche doing the vocal.

Beige is usually considered the weakest of the movements and the one most showing the pressures of Ellington's deadline. It sounds pretty good to me now, and has at least one outstanding melody: the one shared by the waltz (in 3/4 time, of course) and "Sugar Hill Penthouse" (in 4/4). The movement does ramble some, and it sounds to me as if the Duke didn't really know how to end the piece; the ending he came up with reeks of Hollywood. In any case, Ellington himself didn't seem to consider this movement up to the level of the other two; it got pretty short shrift in the "official" 1944 recording, and he left out the opening and closing passages when he recorded it in 1965.

Although B, B & B has enough flaws that it can't be considered Ellington's best extended work (The Tattooed Bride or Harlem, maybe?), it does have some of the Duke's finest writing, along with a certain amount of filler. It certainly deserves to be more well known than it is. Compare it to Rhapsody in Blue. Gershwin's piece, much beloved by concertgoers and studied in music appreciation classes, has some great melodies linked by pretty lame transitions. Some of Ellington's transitions are weak, but overall, B, B & B has to be considered a more well-constructed piece than the more famous Rhapsody, and the melodies are just as good. Give it a listen: the 1943 premiere is on a Prestige CD, the 1944 "official" excerpts are on RCA/BMG, and the 1965-71 Private Collection version is on Saja, if you can still find it. 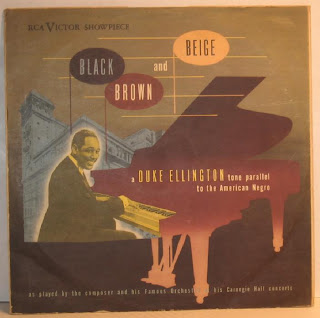 Posted by Jeff Crompton at 8:00 AM