Around 1977, when I was a student at the University of Georgia, I used to haunt the library, devouring all the books and magazines about jazz that I could find. The periodicals room carried a couple of European jazz magazines that I never would have discovered otherwise. One day a found an ad (I think in Jazz Journal International) that fascinated me. It was a listing of the Horo Records catalog, with instructions on how to order directly from their office in Rome. I photocopied the page and kept it all these years.

The record listing was mouth-watering. Lacy, Konitz, Sun Ra, Don Pullen.... I didn't have much money at the time, but what disposable income I had all went to records. I ordered Gil Evans' Parabola and Steve Lacy's Threads, and sure enough, several weeks later a box from Italy arrived on my doorstep.

I learned some things about Horo records right away: first, the music was incredible. One side of the Lacy album was solo - not an unusual setting for Lacy - but the other side found him collaborating with Alvin Curran and Frederic Rzewski (from the legendary live electronic group MEV) in an electro-acoustic trio. The Evans album was recorded while he was touring Europe with an eight-piece band. The voicings and textures Evans got with only four horns (including Lacy and Arthur Blythe) were amazing. I also learned pretty quickly, though, that Horo records were cheaply pressed and that the covers tended to come unglued and fall apart.

After that first order, I always meant to place another order or two, but somehow never did - maybe I didn't have the money, or maybe something else seemed more important at the time. And all of a sudden, Horo Records seemed to disappear. You couldn't mail-order them or special-order them - they were just gone.

I picked up a few more of Horo's issues at used record stores over the years, but I always kicked myself for not getting more of them when I had the chance. Many of them became highly prized collectors' items, particularly the three Sun Ra double albums. Then, while Googling around the internet tubes one evening about five years ago, I found a website that Aldo Sinesio, the owner of Horo, had set up. He was selling off the remaining stock of his records at prices which, while not cheap, were not unreasonable, considering the demand. I bit the bullet and picked out a handful, including the three Sun Ra albums, Max Roach's The Lodestar, another Lacy (his solo album on the label was already sold out), some George Adams/Don Pullen, MEV's United Patchwork (again with Lacy), and Konitz with Martial Solal. Once again, I intended to place another order when I could afford it, but by the time I tried again, the website was gone.

My latest Horo came in the mail today. I found Sam Rivers' Black Africa - Perugia on Ebay. Much to my surprise, no one else bid on it, so I got it at a decent price. I'm enjoying the familiar shiny and attractive, but flimsy , jacket, and the great music with the usual background crackle of the cheap vinyl.

And if anyone wants to know what to get me for Christmas, well, Steve Lacy's Eronel or Roy Haynes' Jazz a Confronto would be nice. 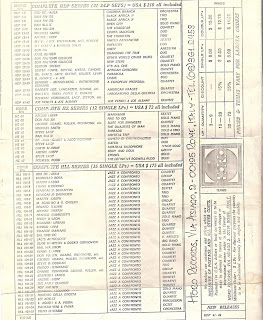 Posted by Jeff Crompton at 4:06 PM

I was assistant producer at HORO Records for several years, when I was in my teens. Aldo Sinesio, the producer, is on the verge of reissuing most of the HORO catalogue on CD, and I will produce the reissues. Lonehill Records has just ripped off a Teddy Wilson record from HORO, so, in order to avoid other "fakes" (the guys at Lonehill have just copied an LP), the catalogue wll be reissued almost in its entirety. Within May/June a series of recordings live by Freddie Hubbard, and an unissued recording, by pianist Dave Burrell and legendary drummer Sam Woodyard, will be out. I think you're the first person to get the news...
Cordially yours, Gianni Morelenbaum Gualberto

Thanks for the info, Gianni - you've made my day!

If this is true you've made my day too. Horo was one of the best small labels of the mid 70's; I hope the Steve Lacy and Konitz stuff is re-issued (I realise I should never have parted with my vinyl............)

Are you still looking for a copy of Eronel? Email me at dpcoffey at gmail youknowwhat com