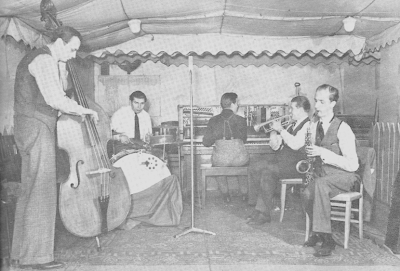 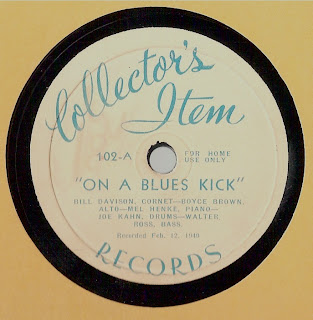 Posted by Jeff Crompton at 8:50 AM

Thank you so much for posting that piece on Boyce / Bro Matthew and, especially, the link to the Collectors Item Cats records. Like you, I've been aware of these records since first reading about them about thirty or forty years ago in The Pictorial History Of Jazz. I loved Boyce's work on the 1940 McPartland sides you mention, and I think I've since tracked down every other record Boyce made, but not the "Collectors Item Cats" sides. I've made occasional attempts to track down the records over the years, but without success. When I've mentioned the existance of a session with Wild Bill Davison - even when I specify 1940 - even knowledgeable jazz people almost always assume I'm talking about the 1956 "Brother Matthew" album with Condon, which is a nice session but Boyce sounds very rusty.

Now, after about 40 years I've finally got to hear these sides; and they're great! Thanks a million.

I clicked on the link to the record and "Error: Page Not Found" came up.

Yes, some of my links are broken due to a website meltdown, and I've been slow about getting them fixed. Check back in about a week - I should have everything up and running by then.

The link to the recordings now works, and I've made new transfers of the tunes - I think they sound better than the old ones. Enjoy!

As an alto saxophone player myself I'm knocked out by Boyce's playing. I've got the four numbers from the Paul Mares' session and the Jimmy McPartland four (the latter courtesy of YouTube) but I;ve only just now heard the pair with Wild Bill, courtesy of your blog. They are utterly individual! I'm even more impressed than ever by his playing: robust, declamatory, unique. Thank you for putting them on.

"Unknown" just above is me! Something went wrong with the transfer!

Thanks for posting these two wonderful tracks. I'm baffled that Boyce doesn't get more notice from the jazz critics. His ideas are unique, though very Chicagoan and his tone is his own I'm an alto player and am mesmerised by these tracks. A fellow saxophone player said of Lester Young "What planet did he come from?" I feel the same about BB.