Warning: more ramblings about Ancient Musick ahead. Lately I've been fascinated by Alcide "Yellow" Nuñez, the early New Orleans clarinetist best known for his recordings with the Louisiana Five. As I explored Nuñez's music, I realized how much his career was entwined with that of trombonist Tom Brown, a fellow New Orleanian.

History is usually more complicated than it first appears, and the history of jazz seems more and more like an onion the more you examine it; peel off one layer, and there is another just underneath, waiting to be explored. Years ago I "learned" that the Original Dixieland Jazz Band was the first New Orleans jazz band to travel north and expose the world outside of Louisiana to the complex, intriguing sounds of New Orleans jazz. (It was only later that I learned of Bill Johnson's Creole Band, which included Freddie Keppard and George Baquet, and their success on the national vaudeville circuit as early as 1914.) But Tom Brown actually beat the ODJB to Chicago, and he and Alcide Nuñez, with a little more luck, could have enjoyed the success and fame that came to the ODJB.

Brown and Nuñez were part of the circle of white musicians centered around Jack "Papa" Laine, whose Reliance Brass Band was very popular in the early years of the 20th century in New Orleans. "Brown's Band From Dixieland," which included cornetist Ray Lopez and 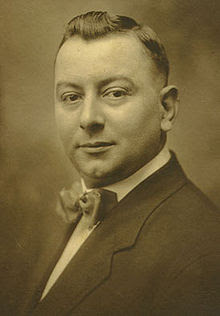 clarinetist Gus Mueller, came to Chicago in May, 1915 to open at Lamb's Cafe. Their reception was lukewarm at first; the music seemed loud, shocking, and impossible to dance to. But people were curious, and soon Brown's band was an attraction; the line to get in Lamb's was often two blocks long. Around this time, the word "jazz" (or "jass") began to be applied to this unusual music from New Orleans.

Clubowners and promoters suddenly wanted jazz bands, preferably from New Orleans. Drummer Johnny Stein brought his band up from the Crescent City and opened at the New Schiller Cafe. In addition to Stein, the group consisted of "Yellow" Nuñez and three future members of the ODJB: Eddie "Daddy Edwards on trombone, pianist Henry Ragas, and Nick LaRocca on cornet. By this time, Harry Shields had replaced Gus Mueller as the clarinetist in Tom Brown's band. Nuñez soon had a falling-out with LaRocca (not an unusual occurrence, apparently), and the two bands swapped clarinetists.

When Lamb's Cafe closed, Brown's band hit the vaudeville trail, and were offered a job at Reisenweber's Restaurant in New York City. But Brown didn't think the money was good enough, and he declined. The job eventually went to LaRocca, who took over Stein's band, replacing him with Tony Sbarbaro. The ODJB became the talk of New York, and made records for Columbia and Victor; those 1917 records are now considered to be the first real jazz recordings.

And what of Brown and Nuñez? After a few trips back and forth to New Orleans, they both ended up in New York for a few years before returning home for good. Brown apparently found that the life of a well-paid sideman made for a more secure existence than that of a bandleader, and made himself an indispensable part of the Yerkes dance band empire. Harry Yerkes was one of the most active bandlead 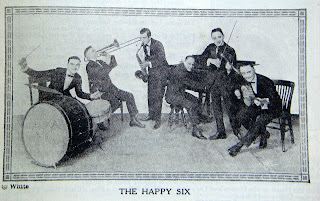 ers in New York from 1917 to 1924; he led (and recorded with) a bewildering variety of aggregations: Yerkes' Jazzarimba Orchestra (featuring xylophone and marimba as part of the instrumentation), Yerkes' Novelty Five, Yerkes' Saxophone Sextet, Yerkes' S.S. Flotilla Orchestra, The Happy Six, etc. Tom Brown was part of most of these groups from 1919 to at least 1923; he made scores of records with various Yerkes groups, as well as with the dance bands of Ray Miller, Russ Gorman, and the xylophone-playing Green Brothers.

After Brown's band broke up, Yellow Nuñez formed a five-piece band, the Louisiana Five, with drummer Anton Lada. Nuñez's clarinet was the lead instrument; the only other horn was the trombone of Charlie Panelli, who later played with the Original Memphis Five. The Lousiana Five was at least a distant rival to the ODJB; they recorded over 40 sides, one of which, "Yelping Hound Blues," was pretty popular. (It's actually much better than the grim title would suggest.) The Louisiana Five recordings have been both praised and panned by jazz critics, but the best of them sound pretty good 90-something years later. Nuñez was a strong clarinetist; he played (on records, anyway) exclusively in the high register, allowing his lead to cut through the sound of the other instruments. He seldom strayed far from the melody, but often indulged in some mild improvisation as the tune progressed.

When the Louisiana Five broke up, Nuñez also found a home with Yerkes; it is reasonable to assume that Tom Brown helped him secure a position with the bandleader. For whatever reason, the clarinetist didn't stay with Yerkes long; he only made a handful of records with Yerkes' groups, all from the years 1919 and 1920. Nuñez led a quartet for awhile, and returned to New Orleans in 1927. Until his death in 1934 he played with various groups, including a police band, but never recorded again. He passed down musical genes, apparently; his grandson, Robert Nunez, is now principal tubist with the New Orleans Philharmonic.

Tom Brown also moved back home, and in 1924 and 1925 he appeared on a couple of fine Okeh records by trumpeter Johnny Bayersdorffer and pianist Norman Brownlee. The Bayersdorffer record ("Waffle Man's Call"/"I Wonder Where My Easy Rider's Riding Now") in particular is a great example of a New Orleans jazz band recorded in the city, and probably represents Brown's best recorded work. He recorded several times with trumpeter Johnny Wiggs in the 1950's (including an album under his own name), showing his brass-band derived style to be basically unchanged. Brown died in 1958.

Unfortunately, one of the things musicians and observers remember about Brown is his virulent racism. Many of the early white New Orleans jazz musicians seemed to have had blinders on when it came to giving credit to African-Americans for creating jazz, but Brown's attitudes went beyond that. I decline to quote some of the statements attributed to him.

Recordings by Nuñez are somewhat hard to find now, but most of the Louisiana Five sides have been reissued at various times, although often on small labels, and most of those collections are now out of print. There are several tracks by the Five in the Ragtime to Jazz CD series on the Timeless label, and one track on Retrieval's Pioneer Recording Bands. The Happy Six have their own collection, Dance-O-Mania, on the Rivermont label; Nuñez plays on a couple of the tracks, and there's plenty of Tom Brown there, of course.

Because these recordings are so hard to come by, I've posted several items from my 78 collection here in mp3 form. As far as I can tell, the Louisiana Five's Columbia record of "Yelping Hound Blues" and "Just Another Good Man Gone Wrong" has never been reissued, although I may have overlooked some obscure release. I also included a side by the Happy Six which doesn't appear on the Rivermont CD, "Who'll Be the Next One (To Cry Over You)." It's early-20's dance music, not jazz, but it's pretty good for what it is; you'll hear a "straight" trombone solo on the melody by Tom Brown. The virtuoso soprano sax work toward the end is probably by the great (non-jazz) saxophonist Rudy Wiedoeft, although it could be F. Wheeler Wadsworth. And finally, there's a track by Yerkes Southern Five which features both Nuñez and Brown, Lucky Roberts' "Railroad Blues." It has been reissued, on one of the Timeless Ragtime to Jazz CDs, but it's so good that I couldn't resist posting it here; it may be the best recorded performance by Nuñez. In addition, you can download the Louisiana Five's Edison recording of "Clarinet Squawk" here; it's not their best work, though, in my opinion.

I'll let the last word on Alcide Nuñez belong to Charles Ellsworth Russell, Jr. In 1918, long before Pee Wee Russell was the great jazz clarinetist he became, his father took him to an Elks Club event in St. Louis. The band was the Louisiana Five, and the twelve-year-old Pee Wee was surprised and amazed at what he heard from Nuñez's clarinet: "Nuñez played the melody and then he got hot and played jazz. That was something. How did he know where he was and where he was going?" If for no other reason, we should honor Alcide Nuñez for introducing Pee Wee Russell to the world of jazz.

Acknowledgments: I referred to the following books in preparing this post:

The Sudhalter book in particular was very helpful in sorting out the comings and goings of the early white New Orleans musicians in Chicago and New York.

The first photograph is of Alcide Nuñez, from the Nuñez family archives. The second photograph is a rare shot of The Happy Six, with Tom Brown, from a 1922 Columbia Records Catalog in my collection.
Posted by Jeff Crompton at 5:00 PM

HI! I am the great great great granddaughter of Alcide Nunez. Great article! It's nice to see people are interested in his contribution to the music world. Many of his family members down the line have pursued music. I guess it's on our blood : )

I am the Great Grandson of Alcide Nunez Robert Nunez III than k you for this well written article. One humble correction I have played with the Louisiana Philharmonic Orchestra of New Orleans Louisiana since 1991 as principal tuba I post I still retain at the moment. The old orchestra Was Named New Orleans Philharmonic and was changed in 1990 when the musicians picked up the new names themselves and formed a new orchestra.Thanks Again!

Hello, really interesting article. Most of your sources are familiar to me, but your source by Brian Wood... how would one obtain this? It seems hard to find? Thanks

Tuppy, email me at jeffcrom(at)bellsouth(dot)net. The Wood book is long out of print, but I may be able to fix you up.