Audio Glimpses of the Past

I spend a good bit of time in antique stores these days, searching for 78s. A couple of months ago, I visited an Atlanta antique store which had an interesting-looking box. It looked like it might have records in it, and it did - not 78s, but 40 or 50 home-recorded discs. They were 12" discs; some were marked as 33 1/3, and some were labeled with song titles or rudimentary information about the radio programs they were recorded from. I bought three of the most promising-looking of the records, took them home, and found them to be easily playable on my turntable. Moreover, they were quite well-recorded, for the most part. A couple of the sides were pretty disappointing - they proved to be nothing more than recordings of disc jockeys playing records, but several of the sides were intriguing and musically rewarding enough to get me pretty excited.

Radio was once a more interesting and creative medium than it is these days. Bands of all types commonly broadcast live from clubs and ballrooms, their sounds carried over the various radio networks to listeners across the country. These broadcasts were sometimes recorded by hobbyists with home recording equipment, which until the late 1940's meant a disc recorder of some kind. The person who recorded the stash of discs I found labeled some with his name, and even with information about the equipment he used. 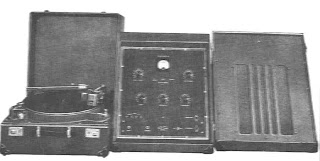 Our recordist was named J.M. Keith, apparently from Atlanta, since most of the radio stations he recorded from were Atlanta stations like WSB and WAGA. On a couple of discs he engraved the make, model, and serial number of the recorders he used. The earlier records were made with a Presto Model Y, serial #4111. The Model Y paired one of Presto's cheaper recorders with an amplifier and speaker. Later, Mr. Keith upgraded to a Presto 6N, serial #1891. The 6N was a high-quality machine, used by many radio stations. And it wasn't cheap. The price for 6N was $735 in 1950; it probably wasn't much less in 1948, when Keith seemed to have acquired his. 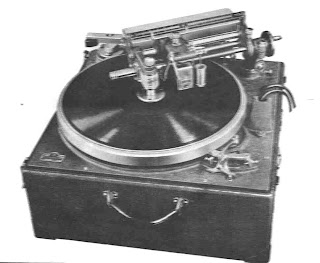 Our friend J.M. Keith had somewhat eclectic tastes; he recorded all kinds of music. There's a really horrible "lounge" quartet from a club in New York, several disc jockey shows, and lots of recordings from the semi-classical Bell Telephone Hour. Listening to those first three discs and examining the labels and sleeves gave me some insight into Mr. Keith's labeling system, though, so I went back to the antique store and bought all of the records that I though might contain worthwhile music. I ended up with a dozen discs. They all seem to be have been recorded in 1947 or 1948. I played them all one evening, one after another, and it was like a trip back in time - like listening to a couple of hours of late-forties radio, dialing to different stations every twelve minutes or so. Most of the discs are quite well-recorded, although in a few cases, the surfaces have deteriorated a little bit. And Mr. Keith would occasionally record with the gain set too high, resulting in some distortion. 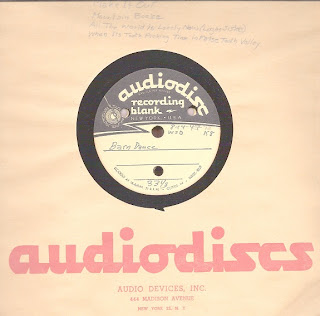 There ended up being six sides of music that were interesting enough to digitize and preserve:

Three tunes by the Ray McKinley big band from the Roosevelt Hotel in New Orleans, August, 1947. One of these is Eddie Sauter's amazingly forward-looking "Sand Storm," which the band had recorded in the studio a year and a half earlier.

Three selections by a very different big band, that of Noro Morales. "Caramba Bebop" from this broadcast is a very hot piece of Latin jazz, with an oddly wonderful piano solo by Morales.

A broadcast by the Adrian Rollini Trio. Rollini was the first great bass saxophonist in jazz, but by 1947 he was playing vibes and doubling on chimes. These are the only hot jazz chimes solos I've ever heard.

A side split between Rollini's trio and the Mary Osborne Trio. Osborne was an excellent Charlie Christian-inspired guitarist, but she's featured mostly as a vocalist here.

Twelve or so minutes from an August, 1948 broadcast of the Grand Ole Opry. This is an interesting broadcast, but I was surprised at how lame most of the music was. The other side of this disc is much better:

Part of the WSB Barn Dance program that followed the Grand Ole Opry. Barn Dance was similar to the Opry, but the music (and comedy) is more "down home."

I have uploaded selections from all of these broadcasts (except the Grand Ole Opry) here. Once on the page with the links, you can click to listen or right-click to download. I hope you enjoy these audio glimpses of the past. And thank you, J.M. Keith.
Posted by Jeff Crompton at 10:45 AM